Birdsville is one of the hottest and most isolated places in the world.  We flew east from Alice Springs over 1,000 sand dunes that made distinct furrows going north-south through the Simpson Desert below us:

The red sand seemed to go on and on forever below us.  In reality, it was just a two-hour flight, and then we started to see water, lots of water.  The town which gets very little rain had been flooded by water flowing down the Cooper and Diamantina Rivers from the north.  All the Australians on board were very excited to see this desert town turning green for the first time in many years.

We landed at the airport and hurried through the chain link fence to use the bathroom in the Birdsville pub. 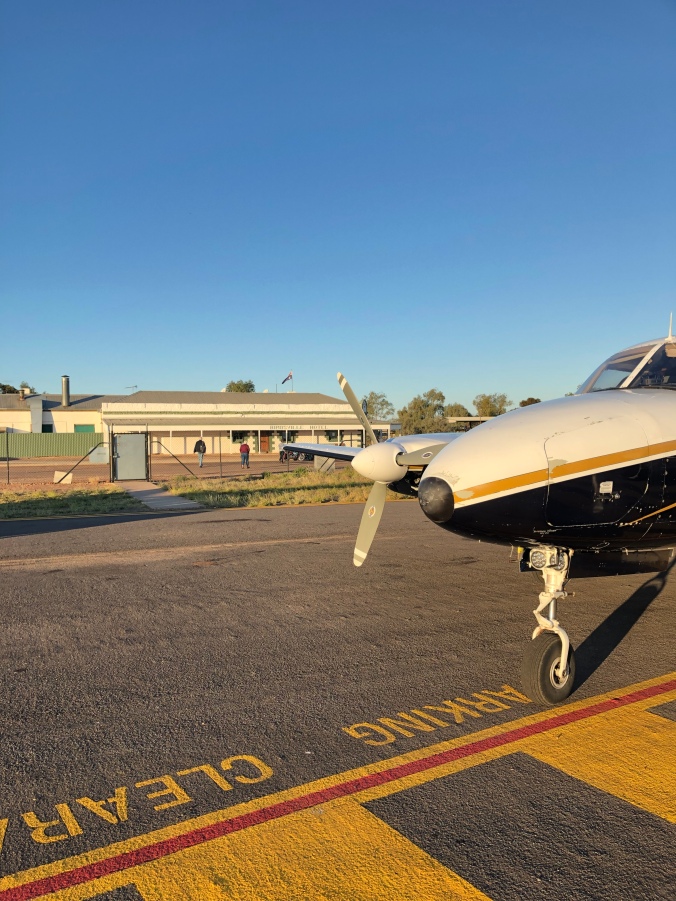 Our chieftain plane with the gate and Birdsville pub- hotel just beyond it.

After using the facilities and putting our luggage in our room we went into the famous pub. The walls were covered with donated cowboy hats. 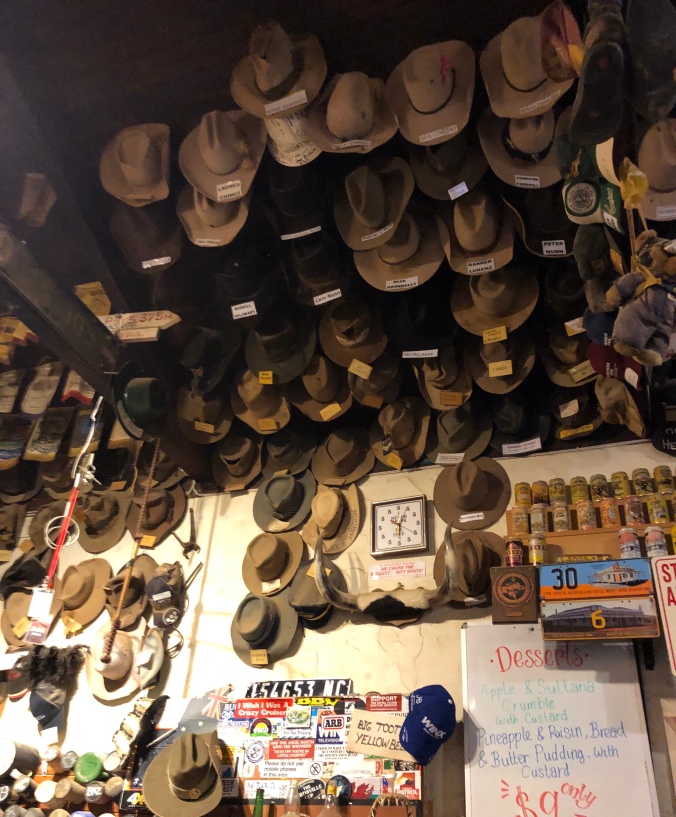 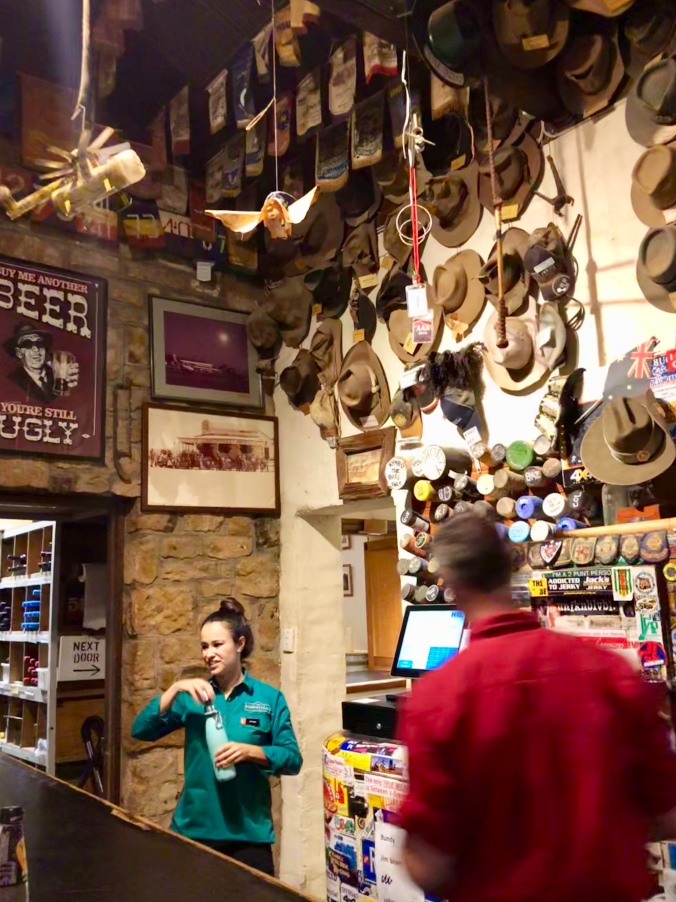 Once a bustling small town with 3 hotels and 3,000 people, Birdsville now has a resident population of 140 people with only three children in the local school. In contrast to the desert, we’d been passing over there was cell phone and internet. But in order to promote a sense of community cell phone use was banned in the bar. If you were caught with your phone out you were supposed to put a donation to the flying doctors in the kitty on the counter.

Earlier that morning we’d visited the flying doctor museum in Alice Springs. This is not a thing of the past, but a very important part of the health care system in Australia. 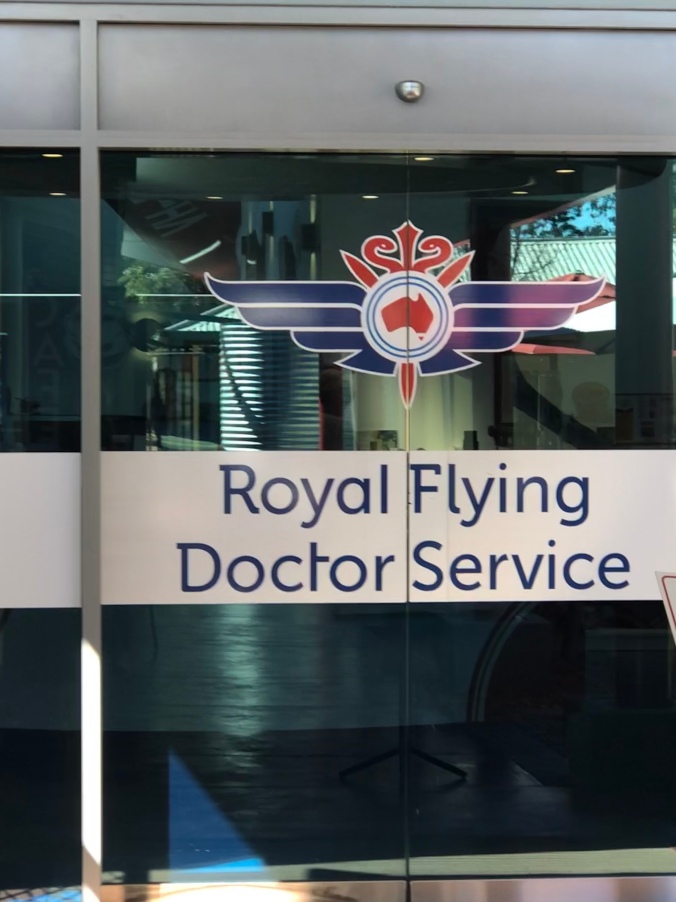 The flying quacks (As our bus driver called them) have 23 bases and 73 turboprop planes. They have recently added a jet that can land on a short airstrip. We’d experienced their hospitality when we landed on a Sunday at an isolated airport to refuel. Everything was closed but the nurses at the flying doctor hanger let us use their facilities and offered us tea. Most outback places including stations have an airstrip. In an emergency, the flying doctors go out in the dark. They’ve been known to land on an airstrip lit by toilet paper rolls burning in tin cans.

The green planes indicate medical planes in the air

A plane that was used by the flying doctors 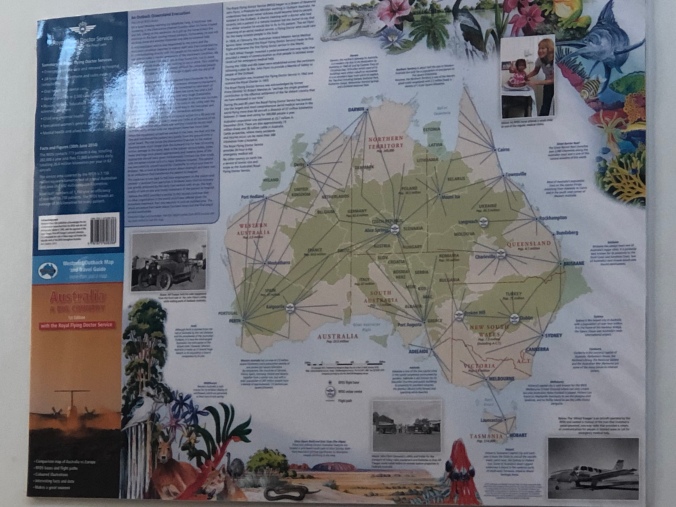 This map shows the size of Australia for Europeans. Europe placed inside Australia

Sitting in the Birdsville pub we had a wonderful conversation with a pilot stationed there for the winter season. The Australian winter is during the American summer. Winter is the busy tourist season with reasonable temperatures while in summer it can get to 122 degrees Fahrenheit. The pilot described how he loved flying at night in the outback, with the stars filling the night sky.

There was a limited menu for dinner and breakfast because the major trucking route had been closed for 6 weeks due to flooding. All new supplies for the restaurant were coming in by plane. Despite that, we were well fed. I marveled at some of the historic pictures on the walls.

The first Saturday in September Birdsville becomes crowded with over 9,000 visitors for the Birdsville races.

This was the last overnight on our epic flight around Australia. I took some quick pictures the next morning on the way to board the chieftain for an all-day flight to Bankstown just south of Sydney: 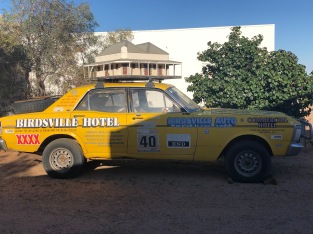