Advertisements confused the eyes and the brain, where was the road to San Luis?

We turned right onto a very steep little road, which was still paved.  We descended down and down the gasping for breath at every turn.  I didn’t feel afraid, just shocked at the view that descended into rolling clouds coming off the rainforest.

The road got rougher and steeper, but still no La Café Bella Tica.  We pulled into the artist’s studio, since the sign was in English they probably spoke English.  A nice lady came out as soon as we pulled in.  “We’re lost could you tell us where La Café Bella Tica is?  A first she drew a blank, but then I showed her my Airbub reservation.

“Oh it is further down the road, “ she said in excellent English.

“We will come back again,” I said as we quickly drove out continuing down the road.

Finally a sign Café La Bella Tica, but I did not see a red gate across the street.  We turned down the road, but couldn’t see a gate.  We found a driveway to turn around and went back to the Café.

When we pulled in someone came out immediately.  I took our the directions again. They looked quickly said, “Through that gate right there.”

“That’s what I thought to start with, “ my brother said smugly.

“  But its doesn’t have the sign they describe, nor is it very red, more rusty than red,” I replied defensively. “It is the second house on the left” I continued as we jerked over rocks and ruts in the road.  The first house was hidden in the trees.  We drove past cows with bared wire fences on either side, then we saw a second driveway. My brother turned sharply to the left and we bounced  into the driveway as two large dogs approached wagging their tails. A small women approached smiling broadly.

She said in a mixture of Spanish and English, pointing to her daughter, asking her to translate.

“Si yes I am Patricia and this es mi hermaro, Gene.”  I answered smiling in my broken Spanish.

They motioned for us to park on the grass.

“The house is very simple, “ She said pointing to the small cabin we’d seen on the internet.

That’s Ok I said, my brother stays in a cabin in Minnesota in the summers.”  I replied and her daughter translated.  But I had no idea what a Tico (Costa Rican) cabin was like.

She gave us a tour of the kitchen with wooden counters, a two-burner gas stovetop, and a very odd sink with one long plastic spigot coming out from the wall.

The view out my bedroom window was as green as I’d ever seen.

I will be happy here, just like the cows, we saw residing under the rainbow as we drove up the hidden road. 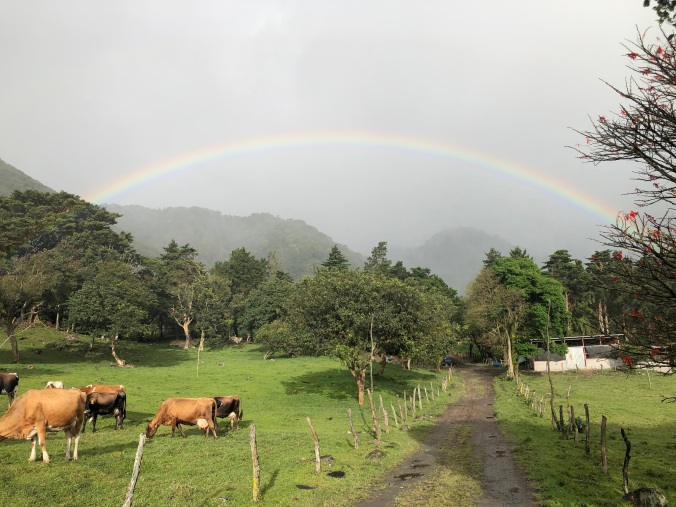