Under the guidance of our pilot Gary Sanderson, the little Chieftain plan carrying seven passengers bounced through its final stops in the little town of Bourke for lunch and then dropped off two passengers in another town.  The sun was setting as we flew over the cliffs of the Blue Mountains in the Gardens of Stone National Park.  The sun reflected on the rocks surrounded by the lush dark green bush, made the cliffs appear to be floating in a sea.

After the sunset, the city lights filled the horizon.  This was a big change from the darkness of the outback.  I was seated up front with the pilot.  I kept looking for the open space of the landing field.  It was like trying to find a row of fireflies in a jumbled sea of lights.

The pilot, or at least the instruments on the plane, knew the way. Suddenly the field appeared below.

The chieftain landed. It was time to say goodbye and brave the Sydney traffic. Luckily it was past rush hour. We found the car with my luggage still safely locked in the trunk. After being guided by the gps for 43 minutes we found the friend who’d agreed to put us up for two days.

We got to listen to our friend’s students struggling to play trumpet while we relaxed in the kitchen. A wonderful grounding experience before I boarded my flight back to the USA.

Finally it was time. Wal helped me maneuver my luggage into an Uber ride to the Sydney International airport. I was still so excited from my trip I bubbled over talking to my driver from Sri Lanka. He’d been in Australia three years, drove Uber weekends and had another job during the week. He commented that people in Sri Lanka did not seem to be living as long as they used to since they’d started to eat fast food. I told him that Wal and I never eat fast food.

My slow plan home involved an overnight premium economy flight on Qantas to Honolulu. Premium economy gave me a wider seat, a nice blanket, good food and free drinks. I hoped to sleep at least six of the nine hour flight. I rested but I can’t say I slept. After a nice breakfast on the plane I was herded up an escalator and around a hall to catch a shuttle bus to go through customs.

That probably took about 40 minutes. Then I claimed my luggage and went through extra screening because I’d admitted to having been on a farm. The last guy took one look at this tired old lady and waved me on without opening my large suitcase. Then I dropped the suitcase off for Delta to send it on to my connecting flight.

“How do I get to Delta?” I asked. “Go outside and turn right, it is at the end of the terminal.”

Outside I was hit by moist tropical air. A big change from the chill of the Sydney winter. I trudged on and on rolling my carryon behind me searching for Delta. I probably walked a mile but it seemed like six. I showed my ticket to the Delta person behind the counter but then realized I already had a seat assigned. “Just go through security over there,” she said pointing to a long line.

I went and stood in line for another hour. I complemented a little Korean girl on the lovely flowers she had in her hair. She gave me one. In my mind I sang”go to San Francisco with flowers in your hair “.

After five hours in the air I landed in San Francisco. Since I’d already done customs in Honolulu, it was a snap to get my luggage. I caught a shuttle bus to the Vagabond Inn where I ate some snacks from my suitcase and crashed in a real bed. I awoke refreshed thinking maybe this will work and I won’t have jet lag.

The shuttle bus took me to my last flight. It was just three hours to Minneapolis. My son’s text appeared on my phone as soon as I landed. He was there waiting for me.

Home, Minnesota, where I was born. It had been cold so the lilacs where still in bloom. The perfume filled my lungs while bright greens overwhelmed my eyes.

Lilacs blooming on the U of M campus my alma mater

I stayed one week hardly sleeping at night, tired all day. Jet lag was not avoided even by taking it slow.

Then it was on to my current home- Door County, Wisconsin. I got to sit and stare out the window while my brother drove on the right side of the road. 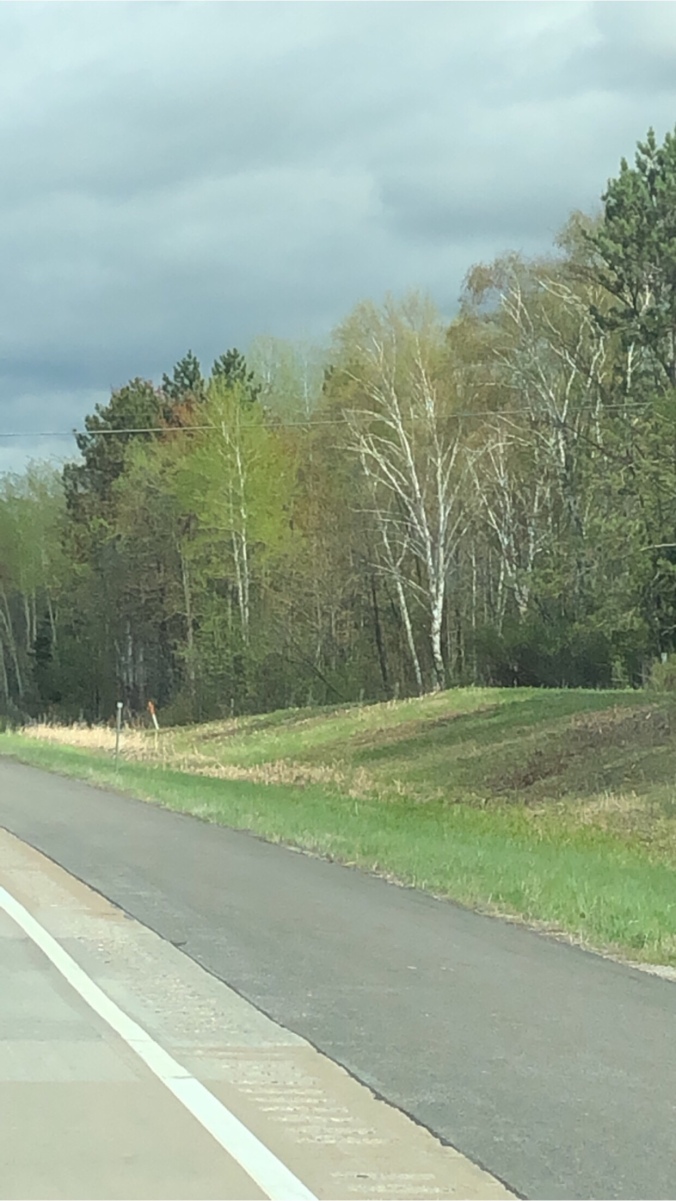 Finally, in my own home with spring flowers saying “welcome”.