We flew out of Broome at 8:00 am leaving the Indian Ocean and the beautiful warm beaches behind us. 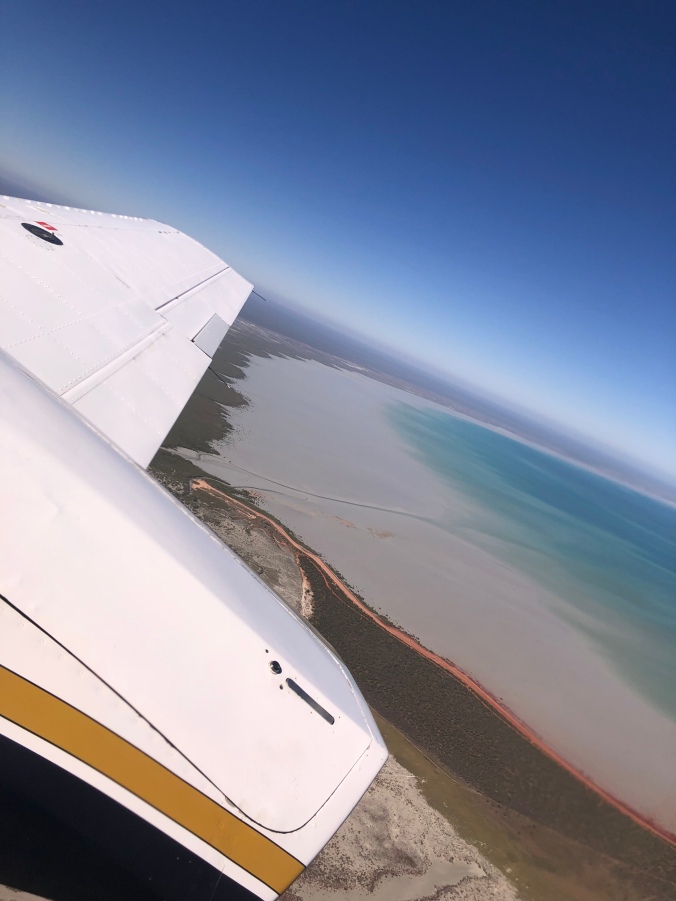 Gary, our pilot, had purchased box lunches for us. We were going to be flying most of the day with a stop for fuel in Hall’s Creek.

Most of the time we were flying over desert with dry creek beds. It look very inhospitable. After sitting for two and a half hours we landed in Hall’s Creek. A strong crosswind buffeted us about as we swayed onto the bitumen (tarred) runway. 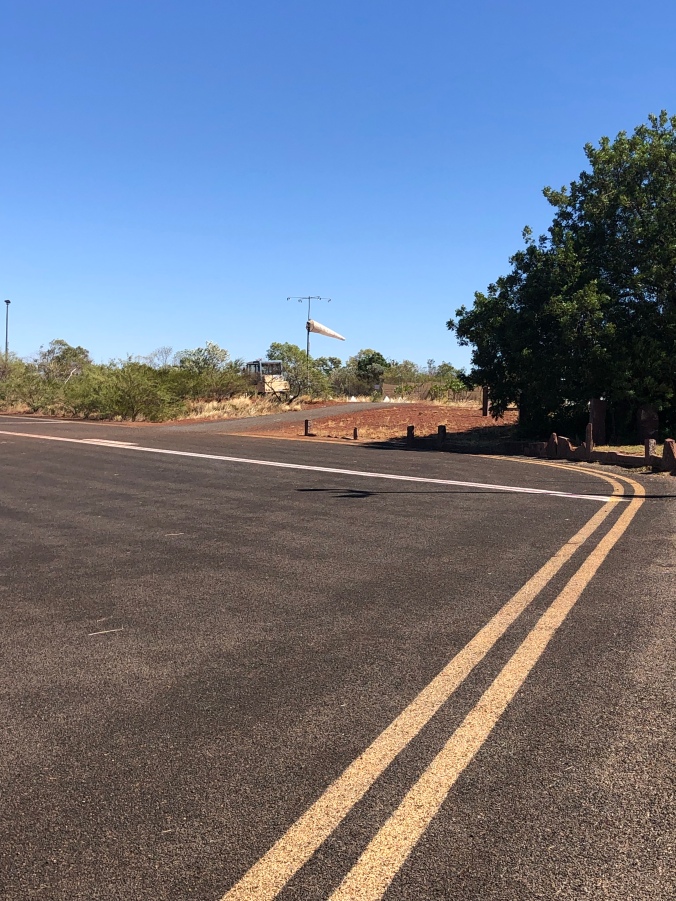 The windsock in Hall’s Creek straight out

After fighting off the flies while we ate our box lunches it was in the air again for another three and a half hours.

It was exciting to see a little bit of green and a small city below us.

The McDonald Ranges at the back of Alice Springs

We had a wonderful dinner at the Tali Restaurant and went to bed,flying all day is exhausting.

I wasn’t prepared for the beauty of an upside down river,.

The water flows underground, huge rocks with water gums and vegetation growing in the sand. 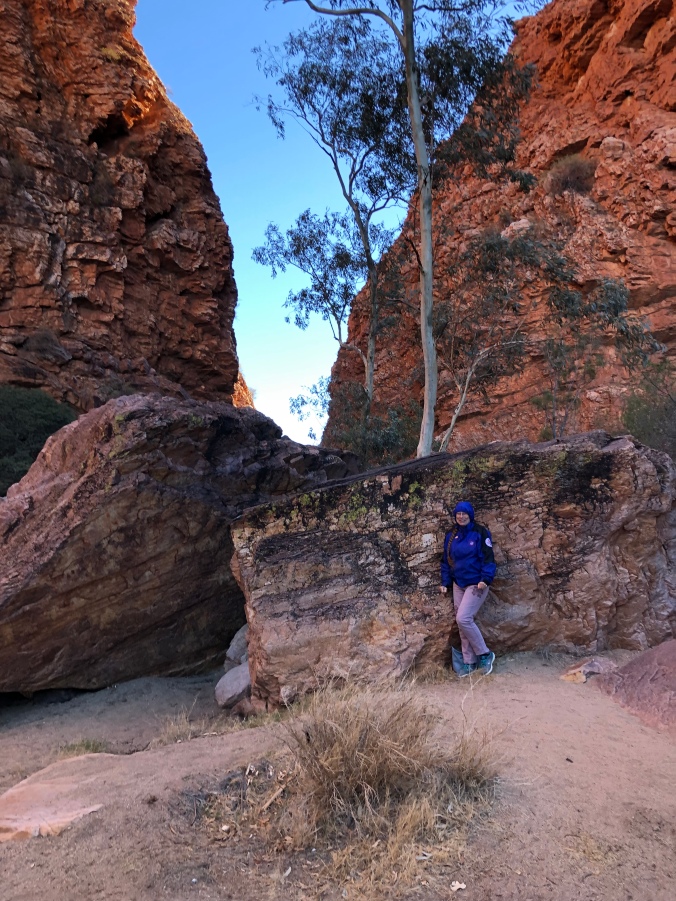 There was definitely no swimming here in the sand but as we walked along we did find water. 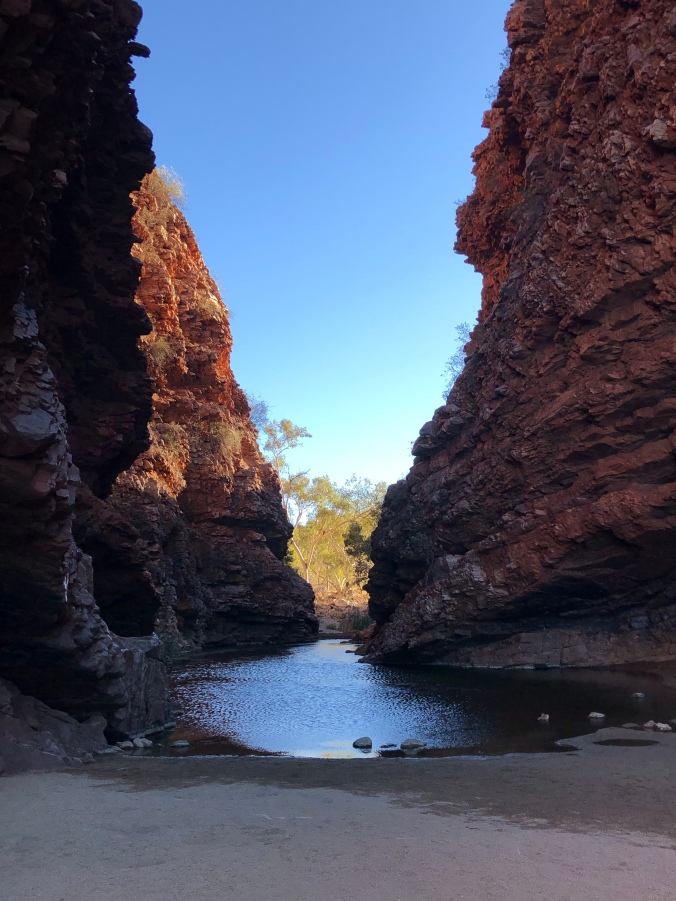 The dry river bed touched the exposed water protected by a red rock canyon walls. We were all very cold. Being from Minnesota I dressed in layers for the cold but others weren’t. We huddled together like penguins to warm up. 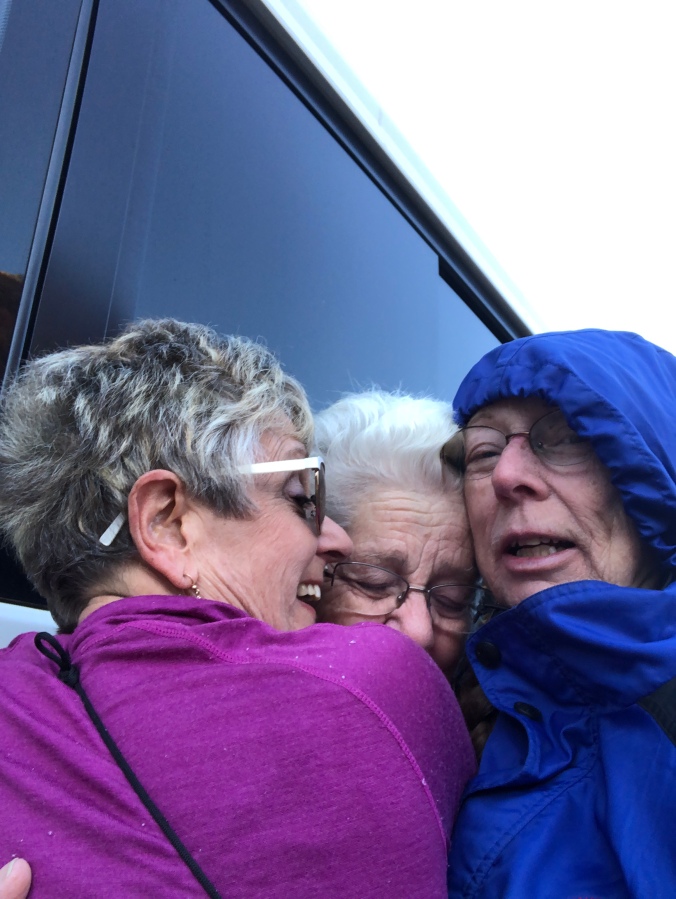 Our Emu runner guide then took us to Angkerie Atwatye. Traditionally only women were allowed to go here:

It was absolutely awe inspiring.

The colors were astounding but to touch the sides of this quartzite chasm was the soft touch of polished stone millions of years old.

Despite the cold I could have stayed here much longer but the bus only gave us 20 minutes. Our guide pointed out ancient McDonald ranges cyclad directly related to the dominant plants from the age of the dinosaurs.

It was beginning to get warmer so I took off some layers and our guide who was shorts started to thaw out.

At our next stop I learned how to do the Australian salute.

This was why we were told to bring fly veils.

These little flies did not bite but they invaded your eyes and your mouth. Our guide said, “If you swallow a few maybe you’ll teach them a lesson and they’ll stop bothering.” I didn’t follow that advice.

From the bus I saw the caterpillar which was the ancestral God that created the McDonald Ranges according to the aborigines.

At the top of the Range the caterpillar reveals itself

Luckily lunch was indoors at the Namatjira Gallery and Restaurant where I saw the lovely painting of the water gums:

After lunch we visited the ochre pits where the aborigines still mine ochre in multiple colors. I was fascinated by all of its uses.

It was used for ceremonial paint for dances and burials, to protect weapons from termites, mixed with medicines and to preserve food for emergencies. It was beautiful and accessible in this amazing spot. It was traded throughout the region like the pipestone that was dug out by the American Indians in Minnesota and traded all around America.

We also stopped at Elery Creek Big Hole, a popular swimming place. I was too cold to swim today. Our guide told us that three years ago when it was full she’d swam there in the moonlight. It hadn’t rained for 18 months so everything was dry.

Our last stop was a memorial for John Flynn who helped start the Royal Flying Doctor Service. 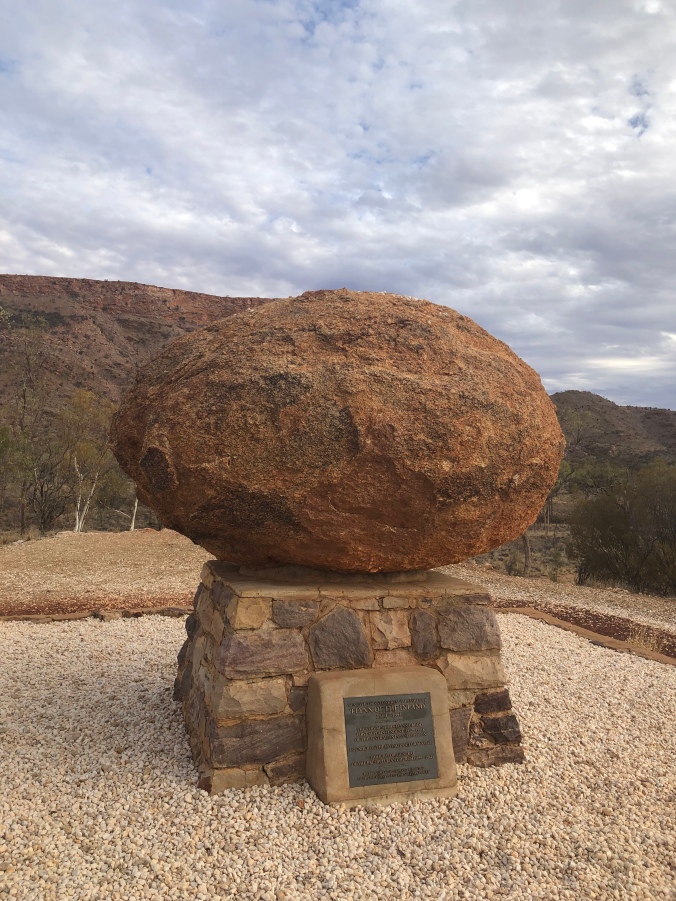 One thought on “Alice Springs”