After a 30 minute flight from Undara we landed on the small plane side of the cairns airport and taxied over by the flying doctors hanger.

We finally had excellent phone and internet service. If you come to Cairns the thing to do is to take an excursion to the Great Barrier Reef but we’d all seen that before. We were here to see the inland and the early development of Australia so after a night’s rest we boarded the train to Kuranda. 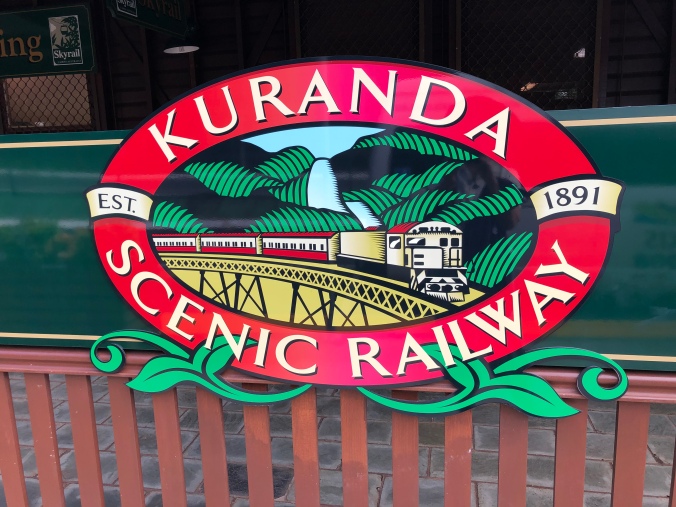 Building this railway in the 1800s was a technological marvel. They used dynamite and picks to carve tunnels in the rock. The line went by a marvelous waterfall. 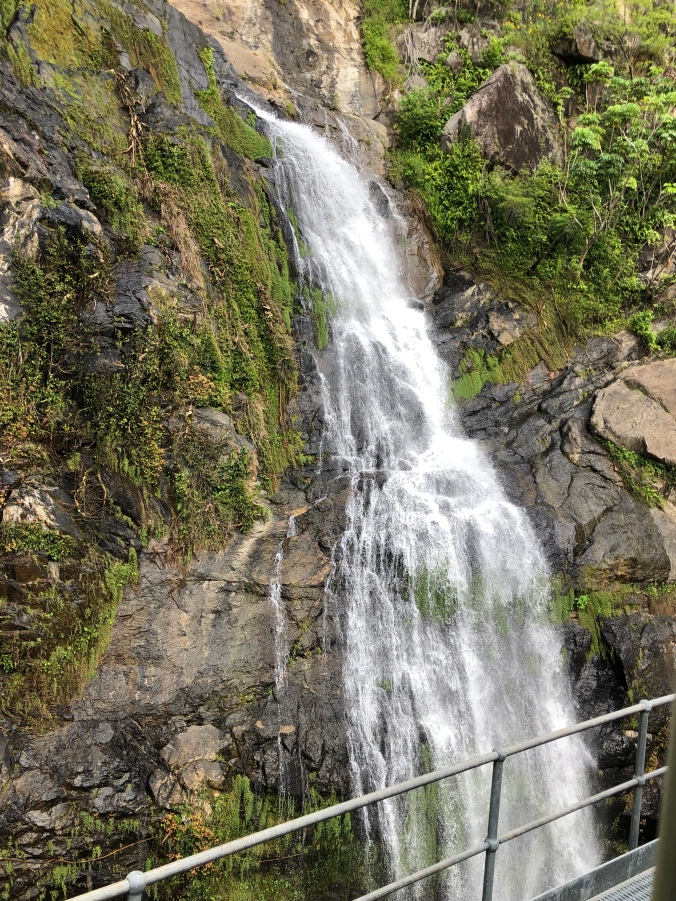 We got to stop and take pictures.

Kuranda is a nice tourist town with lovely shopping but my favorite attraction was the Australian Butterfly Sanctuary.

Here they raise and care for the butterflies. I was able to film them in slow motion. Their grace is beyond description.

They raise the food and care for 18 different varieties of Australian butterflies including the endangered birdswing butterfly I video taped in bush in the blog: Birdwing butterflies and the Leeches of Booroobin. There weren’t any leeches here and the friendly butterflies landed on my hat and shirt. 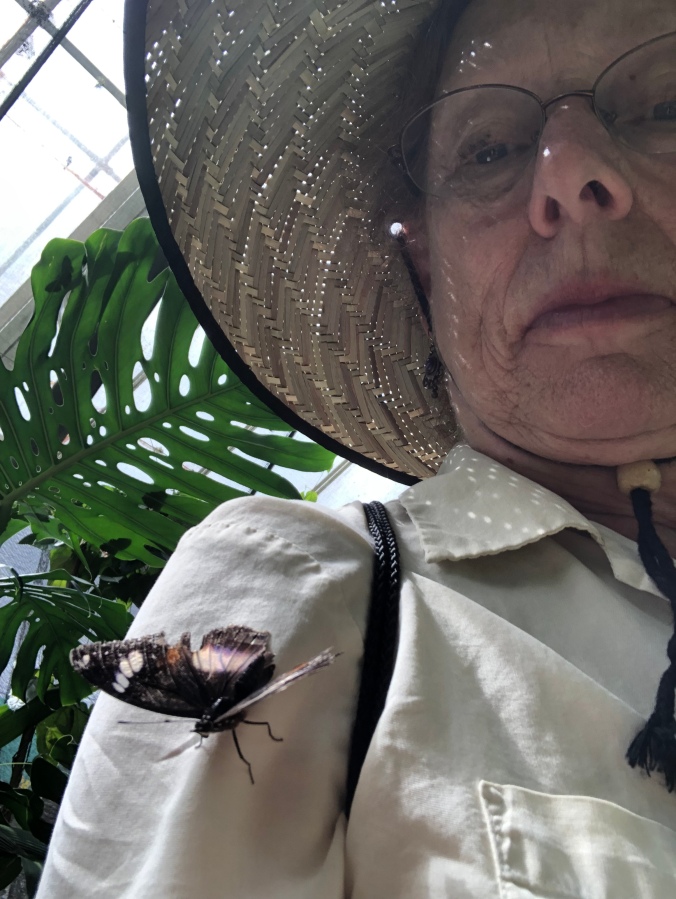 I caught part of the very informative tour that they give of the sanctuary. They collect butterfly eggs every two hours and move them to the lab were they are protected until they hatch because even in the controlled environment of the greenhouse there are tiny insects that might eat them. In the lab after they hatch each Caterpillar is fed their a special food for example the birdswing caterpillar only eats the leaves of the birdswing vine. When they emerge from their cocoons they are released into the sanctuary to mate and lay eggs for the next generation.

Eggs and caterpillars in the butterfly lab

I was so fascinated I almost missed lunch. My stomach was growling as I raced out to join my tour group. We were supposed to meet at Frogs Restaurant which appeared to be close on the map but as I walked down the road I didn’t see anything called Frogs. Luckily I’d gotten the phone number of someone in the group and our pilot came and found me. The restaurant was hidden inside a market not visible from the street.

After lunch we made our way back past the shops to the skyrail . I purchased a couple of lovely things that were light weight so the could fit in my small suitcase and into the tiny luggage compartment on the plane. 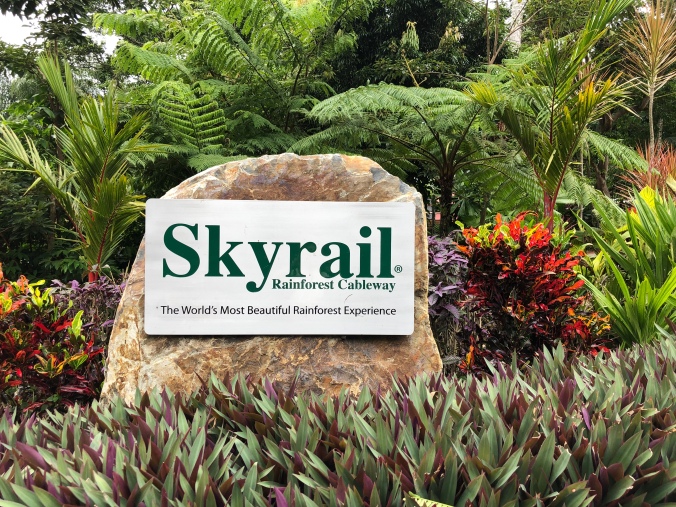 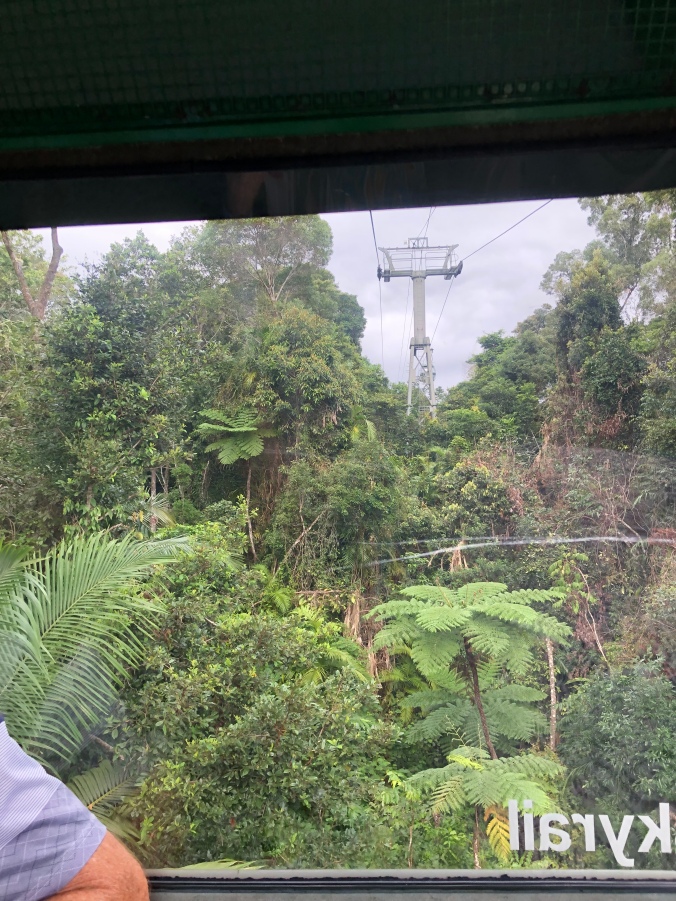 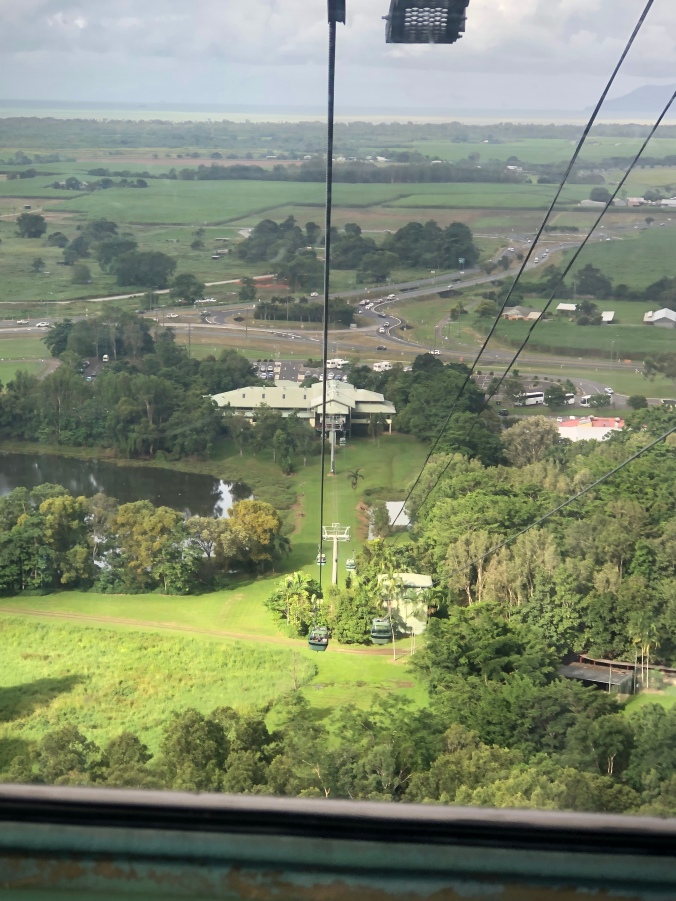 The Skyrail was so quiet we could hear cicadas and birds singing in the bush as we descended back to Cairns.

Back in Cairns I had dinner and went for a walk. On the walk I came across the real world.

This was Labor Day weekend and the unions were organizing a parade. 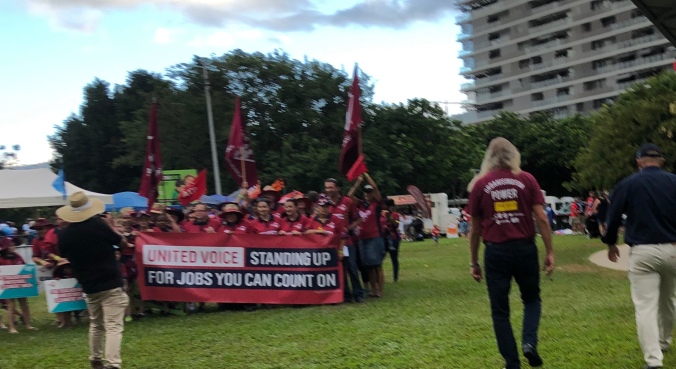 Australian workers have been losing ground in recent years with 12 hour days and lower wages becoming common. The sign says Stand up for jobs you can count on. After I got back to the hotel they marched by below our room.

They yelled, “Stand up, fight back ” as they marched together. Many different unions were represented.

I wished them luck thinking of how important it is for everyone to have a good job and a good retirement. People need to have a place in society to feel valued. I was lucky to have had successful career which was supported by an active union and a caring community.

I went to bed early because tomorrow was going to be our longest flight.

The view from our hotel at night

Wal had lived most of his life in the bush. The sounds of the city kept waking him up. We both looked forward to our next night in the Northern Territory.