My brother and I drove from 510 to Frazee, Minnesota.  For one year we lived there, my mother, two brothers, and I.  Mother worked as a housekeeper for the widower Dick.  Dick had one young son, Hank, a little bit younger than me and another who had just gone off to college. We lived in a house attached to a gas station on Highway 10, then the main highway leading north to Fargo.

But that was 1959, 59 years ago.  Hank and his brother had moved away, but now Hank was back living in his father’s house just like my brother lived at 510, our mother’s house.  In fact he was the mayor of Frazee.

We drove on interstate 94 now the main route and then switched to highway 10, but even highway 10 had moved away from Frazee, the road was still there, but not really a highway anymore.

“I’m not sure I’ll recognize the house, ” Gene said.

Gene said, “I remember ‘ding, dong’ when the customers pulled into the station.  I like to run out and clean the windshields.  Dick always pumped the gas, and i didn’t do a really good job so he didn’t like it.  I was only six, but some people even asked me to clean their windshields. ”

“I’m sure there aren’t any pumps now  Hank said he remodeled the place.” I replied trying to guess how it might look.

The GPS announced, “Arrived.”  We looked around and saw nothing familiar.  We turned left and drove up on a road where there had been just fields.

“Oh look there is the Catholic Church.  We used to slide down that hill onto the highway.”  I said remembering how I’d hurt my tailbone flying over bump on a flying saucer.  Looking at the highway at the bottom of the hill, I felt lucky to have lived.

“Ok, but where is the station.”

I touched the number on my cell phone and a man answered.

“Just drive down and you’ll see a driveway.”

“No we’re past the church we need to turn around.”

“Ok turn around and drive down three houses past the church and turn right into a driveway, then drive down the hill.”

We turned onto the dirt driveway and down the hill arriving at his doorstep, a place  unrecognizable. We hesitated to get out of the car, but then Hank stepped out of the house, a spitting image of his father.

He had invited us to stay the night and we’d accepted not knowing what was in store.  Trains whistled as they soared through the town just across the road from the little house.

“There are a lot of trains that come through, even at night, Hank said apologizing,

“I remember the trains shaking the house.” I replied.

The pumps were indeed gone and the store was now a dining room complete with bay windows.

Hank had an incredible memory of what it had been like.

“It was an old stucco house.  There was an old air compressor in the basement and the hose ran outside.  Dad had bottled gas too.  There was a big Pure Oil sign with a firebird 30 feet high, and my brother had painted a sign that said, “DON’T BLOW YOUR TOP, BLOW YOUR HORN’.  There were three bedrooms upstairs and an oil boiler in the basement, a three stall garage about the size for a model T or maybe wagons could have fit in there.  Dad did oil changes from a pit in the ground, man,  was a big clean up, I cleaned it all up.  There still is a granite wall out back, built by an old stone mason, Ace Marcy was his name, he was a character and a half.  There  were stone flower beds with hollyhocks and lilies with two clumps of cedars.”

Around the back of the house, the granite wall still stood, and one clump of cedars was all that remained the same. 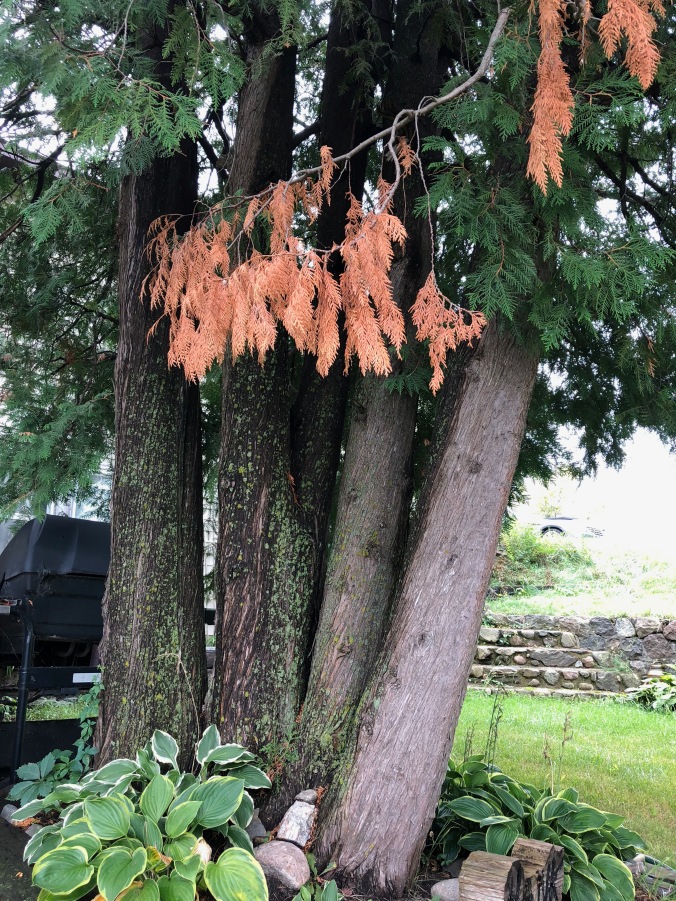 We had lots of fun there.  We used to walk to the theater in town, and pay 10 cents to see a show.  In the winter we slide down and hills and dug tunnels in the huge piles of snow.  We could walk to the skating rink and old Jim kept the stove warm in the warming house.  We played crack the whip on the ice, all of us holding hands skating like a huge snake around the rink, the last one often sliding down, giggling as we pulled them around the rink.

Hank showed us the town as it is now.  They had a lovely river trail, with a place for canoe or kayakers to camp: 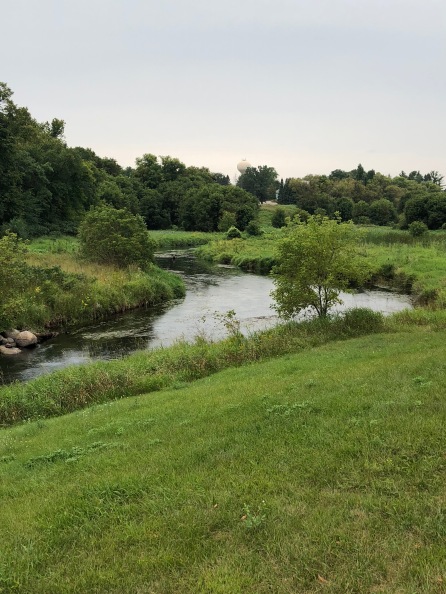 The town had a lovely sign to welcome visitors, but being a long ways from Interstate 94 and not even on 10 anymore, I didn’t see many visitors. 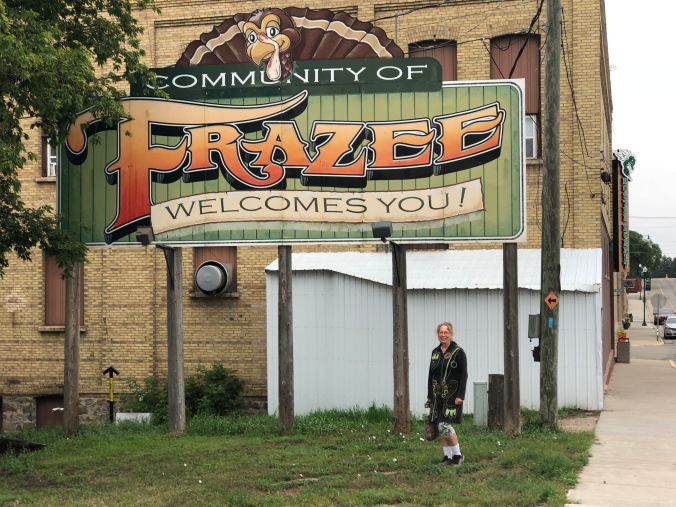 We looked for the places we had gone to and played at.  The bowling alley was closed the theater was gone,a fence marked the spot where it had burned down.  The bank just an old building.  Our school had been torn down and rebuild, the town had nice schools. 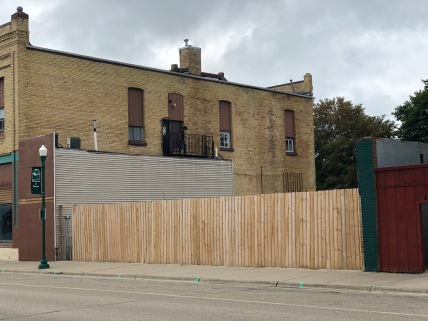 There are lots of turkey farms around Frazee and there used to be a turkey processes plant in town.  The town put in a new water tower and invested in the plant but the plant moved away, the turkey left town. 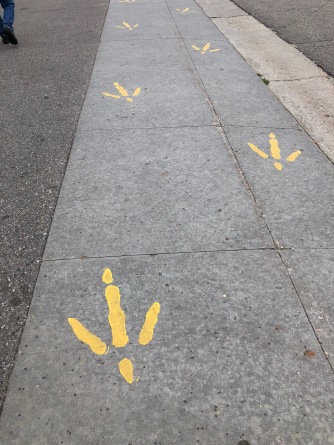 There is still a plastic turkey in town, footprints lead to the giant turkey on a hill outside town, and they live hidden in buildings around the town not allowed outside in the sun.  I remember them in half open cages, gobbling after me on the other side of their fence, at least then they were out in the sun.

Frazee is a lovely place surrounded by beautiful lakes, there is even a town lake.  The mayor has been working hard to revive it, it just needs good internet and people to realize it is there off the beaten path.