We landed as the sun was setting in Longreach. Longreach gets its name from being at the Longreach of the rivers. The motel had recently been purchased by another motel so we registered in one and dragged our bags through the gravel to our rooms in the next motel down the road. Then walked back for dinner. It was good exercise, but we were tired.

The next morning was spent at the Stockman’s Hall of Fame. 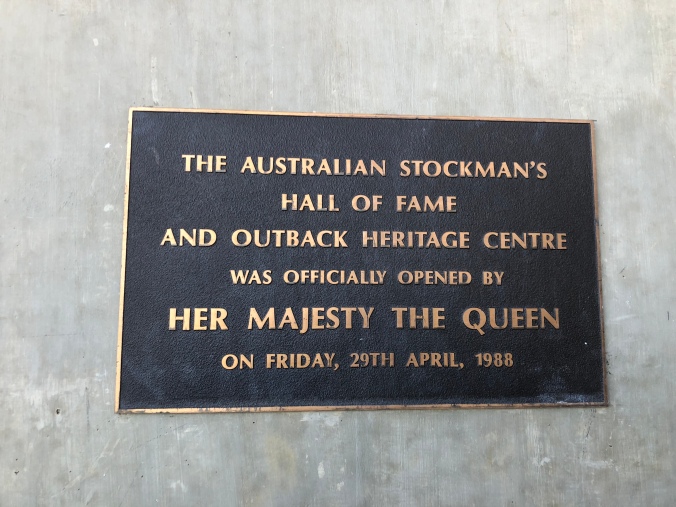 It was an interesting collection of artifacts and stories of the settlers and cowboys. Wal had known some of the people who were featured in the interviews. Wal’s aboriginal friend Ron riding a bucking horse:

the museum also honored the aboriginal women who worked in the outback:

one of the most interesting artifacts was a bootie worn by the dogs to keep out thorns and seeds. It has holes for the dog’s claws.

We went to the live outback show which featured horseback riding and how the kelpies herded the sheep which they do by instinct.

We left the show and went the Qantas museum where we had lunch and then visited the museum. The worldwide Australian airline Qantas was started here in Longreach.

A lovely young man took us out to their first hanger and then we were allowed to go through a locked gate where our pilot was waiting for us in the plane. We felt like VIPs being escorted to our private jet.

Once again in the air we could look back and see the Longreach of the rivers that give this outback community its name.

It is green only because of recent rains. It can go years without rain. When it rains and there is water in the rivers the flat open plains are green